Here are the covers... 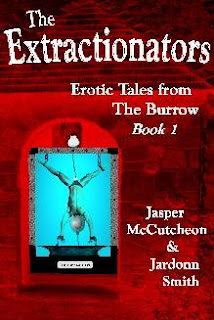 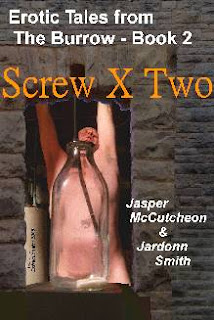 Book 2, Screw X Two, has Kyle crucified Saint Andrew's cross style, while he watches Pete and Brianne endure some horrific-erotic punishments. It's a shortie, sells for 99 cents, and can also be seen at the Jardonn site.

Her labia fought him. Clammed together trying to block him, but his swollen mushroom battered her defenses. Pounded her clitoris. Exactly what she wanted him to do, as she crushed him in her vise. Increased wet friction for them both. His cock. Her pussy. Working together toward their singular goal.

Their pace intensified. Snorting through nostrils with hearts racing and saliva streaming, mucus spraying upon their upper lips. She was close. He was in synch with her. Her milk and his about to spew. A dual orgasm eminent, until he felt something rigid and fleshy poking him between his butt cheeks. "What the?"

A bright light suddenly flooded the room and they were jettisoned from total blackness into a high-sunshine beach. Their bodies froze while eyes adjusted and a voice blared from an unseen speaker in the ceiling. "Pete Barclay! Have you lost your mind?"

Kyle withdrew his pecker, caught a glimpse of Brianne beneath him before turning to see Pete behind him and a quartet of men in black pants and white t-shirts streaming through the door. They pounced upon naked Pete before he could even remove his greasy paw from his oiled dick. Lifted him by his arms and carried him out crucifixion-style, two trailing with his ankles in their grips.

As they exited, four more entered and the male voice from above spoke again. "Hope you two enjoyed yourselves." Kyle didn't know the speaker. Never heard him before, but he did know Brianne.

He stood and looked to her. "Why did you and Pete come in here?"

"Couldn't help ourselves, Kyle," she explained, rising to her feet.

"Well, thanks a lot," he sarcastically voiced his displeasure, as the second quartet secured his arms, preparing to haul him out the same way Pete had gone. "Get me in trouble on my first day." They stretched his arms side to side, lifted him up while the other two grabbed his ankles from behind him. Offering no resistance, he looked over his shoulder, his heart softened toward her. "It's okay, Brianne. I loved every minute of it."

This book and The Extractionators can be seen on Amazon .com.


Posted by Jasper McCutcheon at 4:48 PM