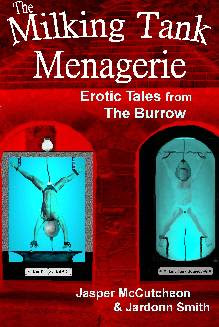 Based on the title and cover picture, it's plain to see that some men inside The Burrow are considered no better than livestock, and accordingly, they will be unmercifully milked.

Meanwhile, recruiters are busy screening for the next herd of cattle.

So, there he is sprawled atop Pete, his chest sticking up in the air. He's staring at himself in the ceiling mirror, helplessly watching as four, mature, beautiful (even though his morality training says they're not, his carnal instincts say they are), naked females work him over. Their tongues and lips and delicate fingers inundate him with licks and kisses and gentle pinchings to his pecs and nipples and stomach and belly. His legs and feet are worshiped, along with his arms and their pits, and finally, he shuts his objecting mouth and allows himself to feel.

His desperate straining to break free transforms into flexing undulations. Displays of his masculinity. Prideful exhibitions of his manly physique. His cock cannot lie. It fills with blood. Flips onto his belly, and whatever remains of his do-gooder mindset that says this is so wrong is completely obliterated when Brianne takes his dick into her mouth, rams it to the back of her throat, extends her tongue and licks his balls.

The Milking Tank Menagerie is 99 cents.

See all three at Amazon