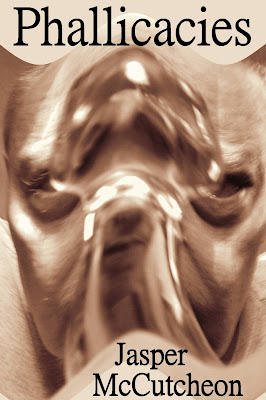 Imagine yourself a female citizen living in the Roman Empire before punishment by crucifixion was outlawed. By foot, you're traveling the countryside from point A to point B on one of the stone-paved highways, and you come upon three naked men hanging from their crosses. Strangely, no guards are in sight. No people of any sort are anywhere near. The prisoners are abandoned, their dicks hard, and a ladder lies nearby.

You have access to three, defenseless, fully-erect men. Would you be tempted? Would such a rape be legitimate?

The scene is set for a snippet from one of three tales in Jasper's book, Phallicacies.

I admire the magnificent forms of three crucified men. I absorb their beauty, for there is nothing more glorious than a naked male suspended from the cross -- his muscular chest, arms, and belly flexing and straining against his torture, his phallus unnaturally inflated with blood, majestically piercing the air. Sad to think of it, such opposites of emotions, for even though his defiant struggle is a sight for lustful eyes, his pain and lingering death is a tragedy beyond compare. It causes the witness to wish natural law could be temporarily halted, to wish beauty such as this could be enjoyed without the pain and suffering that comes with it, without the inevitable and horrific end that awaits a crucified man.
But it is not to be. Natural law suspended would create chaos. No gravity to keep humans and all they have built clinging to the ground. No rotation of earth to generate oxygen for all creatures to breathe. No retribution for those who do evil under the guise of good.
We must have all of it or none of it, and so, these three men -- despite their beauty, despite their purety of heart and honor and duty to Empire -- these three men will be tortured and they will die. I do not want these men to die, but natural law says it must be so. Nothing can change this, but something can work with natural law to hasten an end to their suffering.
Taking that broken ladder, I prop its longer, four-step end to the vertical stipes of the centered cross. From my travel pouch I retrieve a coin, and three steps bring my face to the chest of my soldier.
"Here, loyal citizen, mighty warrior. Open your mouth and lift your tongue. It is for Charon, the ferryman, he will take you across the river for eternal rest."
My soldier takes his coin as I raise myself one more step to kiss his lips. "You are a true Roman. The gods will welcome you; your fellow citizens will remember you; I will honor you."
As I descend one step at a time, I linger where I can reach to kiss his sweat-drenched and heaving chest, peck his horrifically stretched nipples with my lips, lick his tightly flattened and hard-muscled belly with my tongue. One step up, I raise my gown and impale myself on his engorged penis. I take his full length to the back of my vaginal wall, crush him there while wrapping my arms around his back. My hands slide up his shoulder blades. My fingers clutch his trapeziums and I step off the ladder.
He shudders, my soldier does, his body taking my full weight as I rapidly and repeatedly slam my pelvis to his. He groans in agony and ecstasy. His body, further stretched, quickly weakens. His chest and diaphragm lose their battle to fill his lungs with oxygen, and as his testicles contract to jettison his semen from his penis into my vagina, I send my loyal soldier on his way. He orgasms. He expires. He takes Charon's coin with him, leaving his magnificent seed with me.
(end of excerpt)

Posted by Jasper McCutcheon at 2:29 AM