Henry Mitchell is an active Navy man during World War II. He pilots a Grumman fighter plane from an aircraft carrier in the South Pacific... that is until he is forced to bail from his crippled fighter, parachuting down onto an uncharted island. His fear of capture by Japanese soldiers is soon replaced by a reality perhaps worse. He is stripped to his undershorts, strung up and suspended between two trees, crucified Saint Andrew style, and subjected to tortures at the hands of a female Christian missionary-gone-mad and her tribe of brainwashed pygmy followers. Here's his current predicament: 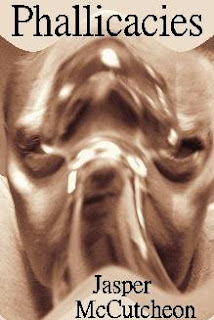 I hurt. Bad. Felt like my arms might rip from their sockets. Hands and fingers were going numb from tightness of vine roping my wrists.

I had no clue as to how many hours had passed since they plucked me from my tree-top perch. The angle of the sun said early afternoon, but I could only assume it was the day following my dusk-time landing into their island tree top. For the moment, both the white woman and her pygmy friends were ignoring me. Her “little ones” staggering about with their arms stretched to the sky and eyes closed, while moaning and crying as though someone had died.

Death would have perhaps been preferable to suffering through the farce being presented below me. The preacher woman had truly been struck with the spirit and was speaking in tongues, the ridiculous babble used by hucksters to convince the gullible of their religious superiority. God speaking through them in a language of gibberish spoken only in heaven.

So goes the claim, but of course it’s just another trick in the arsenal of those who pretend to possess a direct line to the Almighty.

Since the white witch and her doe-eyed followers were busy, I figured it to be an ideal moment for me to relieve myself. With any luck, it might even snap her out of her hamma-gamma-goo tongue-speak.

I let go a long stream and soiled my already dirt-soiled briefs. Ahhhhh! Yes! What satisfaction. My hot urine stinging my legs. Dripping off my toes. Even washing away some of my sweat. Praise be to Jesus, and my bladder gave thanks as well.

My urination festival brought about the desired results. One of the female pygmies saw what I was doing and shrieked in horror, causing the rest of them to stop posturing and drop their jaws in shock. The female shyster, however, was unstirred. In fact, she turned my little act of defiance to her advantage.

“Praise Jesus, my brothers and sisters. Our faith in his power has driven out the first demon. Bit by bit, we will chase the devil out of this pitiful man. Give thanks to our lord and savior, Jesus Christ. His work has just begun.”

A hushed awe fell over the congregation, as they collapsed to their knees, clasping their hands together in prayer. Their lips moved to obediently display their devotion, their high-pitched mumblings sounding like a disorganized chorus of deranged chipmunks.

Couldn't tell if their reverence was for the woman or her god, but without a doubt, her brainwashing techniques were most impressive.

This squeaky prayer session allowed me to listen and read lips, as I focused on one of the female pygmies near my feet. “Thank you, Jesus,” she mouthed. “Praise be to doctor Wilma.”

“Ocka Wilwah?” I laughed in my garbled tongue through painful gag. “You gah be ki’ing me!”

The woman in white robe knew exactly what I had said. She instantly transformed her expression from that of the serene minister of goodness to the enraged purveyor of evil. Seemingly concerned that her pygmy faithful might have understood my words, she quickly solved her problem.

“Go, my children,” her calm expression of piety accompanied her orders. “Go to your homes. Now we pray in solitude. Pray for the wayward soul of this pitiful man. He is our fallen brother. Deceived by the devil. Pray that he can know the love of Jesus as we do.”

Although it was impossible for me to admire this woman, I had to admit that she was a slick one. Not only had she taught them her language, but she also used that language to effectively transform them into robots, and like zombies did they drift toward and into their huts.

Doctor Wilma waited patiently for the last pygmy to disappear before turning her attention to me. Casually strolling to the stone altar, she lifted a large wooden bowl and brought it with her to me. Water was in the bowl, and Wilma splashed the cleansing liquid onto my groin, watching it cascade down my shorts, legs and feet to wash away my urine.

“I do declare, Captain Mitchell. You are a disgusting pig.”

The gag made it too hurtful for me to speak, but I had to mock her best I could. I repeated with a pained smile. “Ocka Wilwah,” which brought nothing more from her than a malicious grin.

She turned away from me, moving toward the hut with steeple on top. Before entering she spun to face me and shook a long-distance fist, but as she did another human of normal height appeared as a shadow behind her, still inside the hut.

The form blocked her path, and when Wilma quickly turned to pass through the doorway, she collided with whoever was standing there.

“Get back, you fool,” she barked, and with a violent thrust she forced the shadowed figure inside and out of her way.

And then, before disappearing into darkness, the good reverend lifted her robe above her head and briefly revealed her backside nakedness to me. It was only a five-second glimpse. It came from a distance of at least thirty feet, but it was an effective tease. A bit of pressure bulged my wet underwear, as doctor Wilma vanished into her hole.